We are all Yellow Vests! 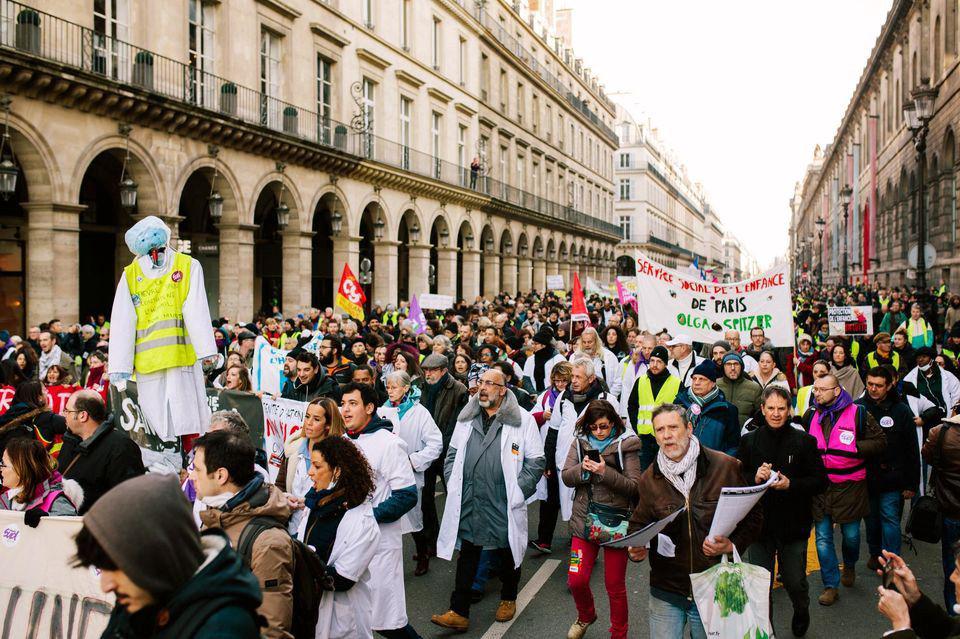 Today, contradiction between reality from those at the top and reality from those at the bottom is really clear: There is Evil and there is Good! We are the Evil, they are the Good! Those at the top advocate the “Free world” by creating imaginary enemies to make their logic prevail. “We defend freedom of expression”; “we defend the right to demonstrate”; “we respect all opinions”! But they use these ideological parades to drape themselves with virtues and hide the real nature of their acts! They are talented illusionists, but their magic tricks no longer work. We, Yellow Vests from all over the world, we see their iron fist under the velvet glove.

This standardization produces further distance with life at the bottom. The European Union is the last example, the last Russian doll of the system. It has swallowed up the Nations and subdued them to its unifying method. However the national states are actually trapped by this logic they have created themselves. In the past, they swallowed up all their local peculiarities in order to melt them down into a unified national entity. Pro-Europeans, and Nationalists are both struck by the same syndrome: the destruction of the worlds of those at the bottom.

Is it up to Brussels, Frankfurt, Paris, Berlin, Madrid to define a standard size of a tomato, or the way to produce it ? Is it up to Brussels to decide for London ? We the people, we say No. Is it up to London to decide for Middlesborough, for Leicester, for Walsall ? More than ever before, we say No. It’s also not up to Silicon Valley, Facebook, Amazon, Google, Apple to transform our lives under the automatic and cold model of the algorithm!

On the apple tree no single apple is identical to another one. But with those at the top, the British apple has to be the same as the Romanian one! The apple of the Landes has to be identical to the apple from Normandy! We live it. We feel it. Everyday. Those from the top are building a colorless, dull and standardized life.

Thus We, men and women from all over the world, We Yellow Vests, we defend characters, nuances, accidents. We defend other ways of life! We defend the diversity of life and not its impoverishment! We defend the rootedness of particular Men and Women, who are the fruits of life and through their vitality they produce variety and not the standardized identity! The universe from those at the top want to produce a monstrous Man! The world from those at the bottom want to rediscover the warmth, color, and curiosity of otherness!

We don’t want to be anymore men and women hypnotized by our screens, prisoners of our smartphones, locked in the prisons of our Likes, of our retouched selfies, pseudo-Us, pseudo-bodies, pseudo-men, pseudonyms, anonymous ! We do not defend Man in itself, abstract, detached from all family, social, and cultural ties, this cosmopolitan Man, this worn-out man, a media portrayed image mass produced!

So we, all over the world, men and women from below lets wear this yellow vest valiantly, symbol of our deliverance, symbol of another beginning!