The Old Lady (Looking for Trouble) & The Masked Gazelle 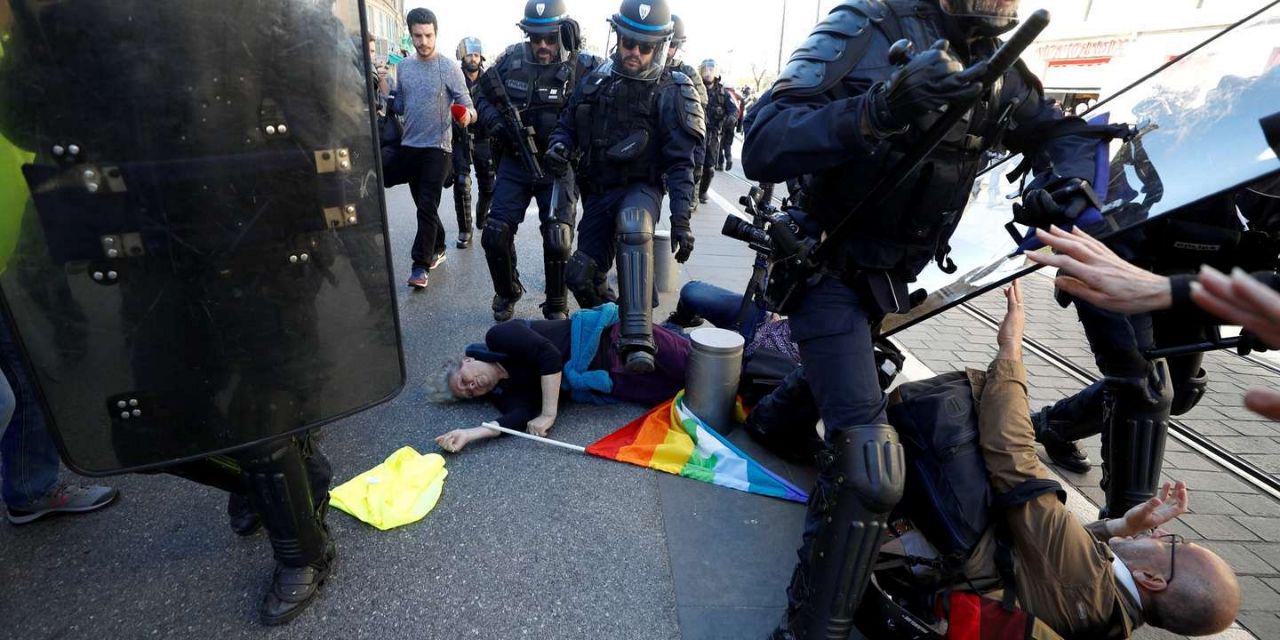 A Story of Our Time by Alain Brossat

Nothing could surpass the grace, elegance, and beauty of this image. Robocop, alert, bounds like a gazelle, unhindered by heavy armor, leaps over the fallen body of a reckless seventy-year-old. All this is the immediate aftermath of an impetuous police charge during the Yellow Vests demonstration in Nice last Saturday. On one hand, the photo was published by the esteemed Le Monde. On the other, the lady was carried off unconscious by firemen to Nice’s Pasteur Hospital in critical condition.

This good deed of Le Monde would soon repair an inglorious one. In the hours following the glorious deed, Le Monde online described their facts of the case: the lady “injured herself” – they used this phrase twice – when she fell after the police charged. It wasn’t he who rammed her against a metal pole, no, it was she who hurt herself when she collapsed on the ground. From there they imagined she’d played it up a bit…

As old and gray as she is, the lady – an Attac activist by the way, which could reinforce their suspiscions – is not quite old enough to have known the scoundrel Stavisky. It’s a pity, they would have made quite the pair. After all, according to the memorable writing of Le Canard Enchaîné, he “killed himself with a revolver bullet fired at close range”.

After this amazing goat (or tiger’s) leap¹ in the annals of France’s Middle Police Age, Mrs. Belloubet, Keeper of the State Seals, tried to set the record straight: all the evidence was against the fallen lady. She was in a forbidden demonstration after all, a reprehensible action, in short: a crime… But, the minister had to quickly qualify the words of Nice’s prosecutor. Slightly shocked perhaps by the inhumanity of the minister's comments, the prosecutor noted the lady was standing on the edge of the demonstration – not inside – a doubt that could open the door to famous attenuating circumstances…

If memory serves me well, before Mrs. Belloubet joined Macron on a fixed-term contract to become minister, she was a teacher, a professor of law – a colleague, that is. There are days when one would prefer to bite one's left ass-cheek to death than be associated with this mob.

Nice’s Prosecutor however, is not the type to spend his holidays with Cédric Herrou (the famous farmer who founded the “French Underground Railroad” for migrants). He finds, nevertheless, something worth looking into in this small incident or accident. He opened a “classic investigation into the cause of the injuries” that nearly killed Mrs. Legay. Her family filed a complaint of “voluntary violence in an assembly by armed public authorities against vulnerable persons” – the name, in terms of the Criminal Code, for a police charge of this kind.

But the whole affair wouldn't taste quite finished if the gang leader didn’t step in. Here he is, finding it appropriate to “wish Geneviève Legay a swift recovery”. He immediately covers that wish by spitting: “and perhaps some prudence”.

We’ve long since given up imagining that any form of wisdom could touch the mind and heart of this brood. Been a long time since they lost our respect.

And let’s not hide it.

1.) If you wondered why hurdle jumping is duly included in the mental and physical training program of our Robocops, you have your answer: it's not just about charging impetuously, it's about stepping over bodies without slowing down. Odds are the Guy Drut (famous French Olympian) of the Nice charge will be rewarded with both a bonus and a medal.