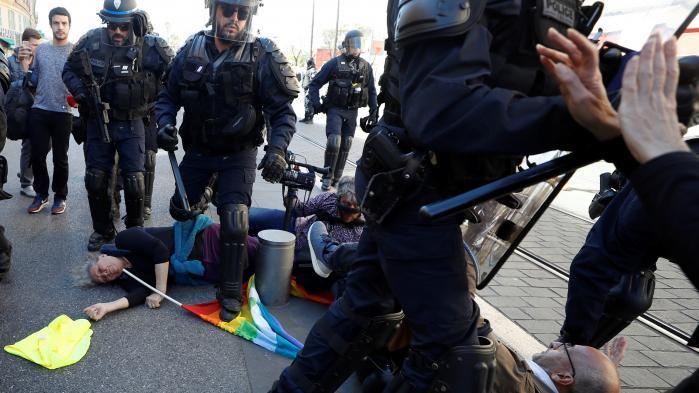 Yellow Vests of the Maritime Alps

Translation of the original from Facebook posted by Priscilla Ludosky

She suffers from several fractures of the skull, broken tympanic bone (inner ear), and subdural haematomas. She was in a coma for several hours. Her condition was so worrying that her doctors waited all day to make a prognosis. Today, her loved ones await a report on the extent of the permanent injuries that Geneviève will endure for the days, months, and years to come.

We, Yellow Vests from the Maritime Alps, accuse the politicians, local and national, the leaders of the top-down hierarchies: prefectures, police, and the rest – we accuse them all of fomenting violence, tensions, and causing countless tragedies that now affect the population as a whole.

Geneviève, to whom we express our support, gratitude, and hope for a full recovery, is unfortunately one more victim in this long procession of debauched, mutilated, disfigured, physically and emotionally traumatized people. This horror has marched on, out of the media spotlight, since November 17th.

This Saturday, the police were guilty of many crimes:

Recall that for nineteen weeks, no damage has been reported in Nice due to the Yellow Vests. Not even a single broken glass from some café’s terrace.

This shows how absurd the police operation on Saturday, March 23rd was. It was disproportionate, exaggerated, and extreme. The goals were clear: increase social tensions, instill fear, and use the Yellow Vests as instrumental means for media, political, and electoral ends.

Like Geneviève, we have always demonstrated peacefully. To brave official decree under these conditions in no way justifies violent use of force. Proportional response to “offenders” is an absolute rule in the streets, military, courts, and elsewhere.

Faced with all this, the Yellow Vests find the various powers supposed to govern the republican and democratic order have failed in their mission and now irrationally exercise their mandate.

The Yellow Vests are concerned about the disappearance of the social contract that guarantees the conditions of democratic life in our country. Obscurantism has taken precedence over enlightened thinking that must promote the common good.

The Yellow Vests find our demands totally refused, despite what the government would have us believe.

The only response we've received for months is the government's brutal violence.

The only weapons we carry are opinions contrary to the government’s.

Unfortunately, Geneviève joined the all too many victims of excessive power. We wish her all the best as she recovers. We wish the same for all victims brutalized by police forces at the behest of a government whose legitimacy we challenge.

It is our right to challenge this government – unless we no longer live in a democracy. Day after day, week after week, the government cynically claims democratic power to justify their crimes.

– Yellow Vests from the Maritime Alps

The Yellow Vests are not a formally constituted organization. This press release was written by a wide circle of those active in the movement who, despite their reservations, believe it reflects the feelings of all who participate alongside them.